Like the little child sitting halfway up the stair, all sorts of funny thoughts run round my head this morning.  My brother's face has haunted me all week.  He died nineteen years ago this month, alone on a piece of land in St. Charles County, amid the trees and columbine.  I see his face in my son's face; I hear his voice in Patrick's speech.  I don't know if the kinship between them really exists or if I imagine it.  I strain to follow every nuance, watching for dire connections between my only child and my baby brother -- in June, especially, the time of year when my brother laid down the burden of his life and walked away.

I heard an interview this week with a writer who talked of being cautious in mentioning the living in her essays.  She would tell her side of any story of her life, but leave out mention of the other person or his point of view.  She dealt with how she felt about divorce but never touched on what her former spouse might have experienced.  It's not my story, she said, or words like that.  I understood what she meant.  Here I talk of how I feel and what I experience but the other characters in my plot stand like cardboard cut-out figures.  I describe my roller coaster emotions but avoid the events which push the cars over the curves, fearing that I will embarrass someone.

Embarrassment.  I ask myself, Is that an emotion?  Something said on social media this week resonated with me:,  I have spent much of my life embarrassed or being an embarrassment, the person wrote.  A warm flush overtook me.  Oh, lady, me too, I cried outloud into my empty bedroom.

A locked room inside my head holds my most humiliating moments.  My first period -- crimson soaking clear through my uniform skirt; me stumbling down the hall supported on either side by teachers.  Falling during high school graduation; again when I received my college degree.  My mother strode towards me after my law school commencement, loudly proclaiming, I couldn't tell which one was you, because you did not fall -- until the very end, on the stairs.  Then I recognized my little girl! She thought herself clever.  My face froze.  My classmates, clustered around their own parents nearby, turned away. Their voices dropped.  I imagined what they must be saying, but I never knew for certain.

After my knee replacement, I struggled in the physical therapy room.  I had pneumonia but had not been confined to the hospital bed.  Fever burned in my chest; snot ran from my nose.  I sat on the exercise table straining to comply with the therapist's request.  She bent her own healthy leg to demonstrate, handed me a tissue, urged me to keep trying.  I blotted my nose and willed myself to quell the despair.  But I could not.  Great sobs wracked my body and I fell forward, hopeless, helpless, into the arms of a woman half my age.  She wrapped her body around me and let me cry.  I felt the room stir; an aide came forward but the young woman holding me gestured him away.  I let myself go and wailed until I felt the anguish subside.  Then she helped me scoot into a wheelchair and they took me back to my room.  I buried my face in my hands as we passed the other patients.

I spent seven weeks in that hospital trying to reach the requisite bend.  I never succeeded.  I went home with the instruction to keep trying.  The therapist who had been so kind to me had gone on maternity leave long before my discharge.  She left without coming to say goodbye.  I never got to thank her.

The winter we lived in Jasper, the external, above-ground pipes froze with me alone in the house.  I had no idea what to do.  I called my father and he instructed me to get a bale of hay.  I went to the local feed store and stared in dismay at the stack of bales.  I had no idea how to get it home or open it once there.  Tears rose in my throat.  I can only imagine how I looked to the clerk but within an hour he had loaded a bale of hay in his own pick-up.  He broke it over the frozen pipes and spread it to warm them.  He refused the twenty which I held out to him as discreetly as possible. He shook his head and told me to call the store if I didn't have heat by the afternoon.

I stood in the driveway huddled in my city coat and watched him drive off, wishing my brothers were there, wishing my husband had not gone on the road, wishing I were stronger.

A light year ago, in high school, at the Father-Daughter dance, I took pictures of the girls in their pretty dresses with their handsome fathers.  I was the only one who had no companion.   Each of my classmates in turn stood before my camera, posing for the yearbook, preening, striking that girl pose while leaning on their fathers' arms.  After I finished, I sat on the steps between floors of the high school, listening to the music.  I closed my eyes and pretended that my father had come home sober and had put on a suit coat to take me to the dance.  Two girls entered the stairwell above me. I heard them snickering; I heard my name.  I did not turn around and after a while, they left.

Truth told:  My father had stopped me on my way out of the house and asked if I didn't want him to take me to the dance.  His stale breath assaulted me.  I stared at his unshaven face.  God, no, I spat at him, and walked away.

I only peak inside the lock box in which these memories live.  Beside them dwell so many more; darker ones, times when I miserably failed as a human being.  Yellowing sheaves of paper bearing long letters of apology that I've penned.  Hurt looks on others' faces.  Sinking feelings in my stomach.  I let these memories stay buried.  I pull through the tiny crack of the barely opened lid, all the lessons that I have learned but I quickly snap it shut against the faces of those whom I have wounded.

It's 7:30 on a Saturday in June.  In a few hours, a friend will come to stay at my house.  I've fretted all week about this visit, because  I have stayed at her beautiful home.  This house, though cute and sweet, and all of those things that people say when they come here, pales in comparison with hers.  She dismissed my worries.  She says she does not judge people by their furniture, and I believe her.  But still.  I keep on cleaning, hoping that the smell of Pine-Sol will redeem whatever faults lie beneath its pungent mask. 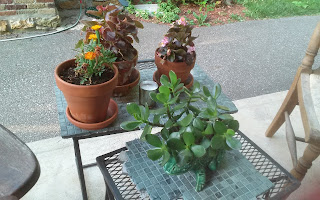 A snapshot taken on my porch this morning.

Today's blog goes out to JANE WATKINS, who knows how I feel.
Jane, Jane:  Your beauty and your goodness flow from you. Fear not.