The boy has been back for a nearly a week but leaves this morning.  Sleep came easily last night, despite the pounding of my heart, the swelling in my feet, and the heaviness in my chest.  The symptoms seemed more related to the salt in my dinner than that little electric current which riffs through my chest and defies the demands of two different medications.  I breathed through it and I survived to the dawn.  Sixty can pose challenges; but here I sit, with my crystal mug of coffee and the keyboard in front of me on the secretary's pull-out desktop.  I'll take the gift of another day.

Yesterday we watched our neighbor's grandchildren running in her yard, blowing bubbles and darting beneath the spray of the hose.  Patrick said, we played like that didn't we, and I nodded, Yes, indeed, you did.   We stood shoulder to shoulder on the front porch, except that his shoulders stand six inches higher than mine and he towers over me.  My little boy.

Brenda came to dinner and a better companion for my intellectual son could not be found.  They share a love of literature and linguistics; and they fell into a discussion of a Japanese film maker from the 1940s which required consultation with Google twice.  I think my son was shocked that one of my friends could know so much about subjects of such interest to him.  I sat and listened.  I know nothing of any of it except I'd seen The Seven Samurai, a hundred years ago, in college.  I got a check-mark for effort and the conversation continued with a technical discussion of the cinematography.  I could not stop smiling.

For several days this week, Patrick filled my dining room table with folded laundry and "dry flat" blue-jeans.  I drifted in and out, watching him sort, discussing job-interview attire, looking at websites of places with which he has interviews scheduled.  We watched the online Bernie Sanders speech.  We went to breakfast at the Opera House.  He hung my Rainbow flag and carried my recycle to the curb.  The dog sat at his feet for four days and slept in the back bedroom to keep an eye on her master, whom she greets with as much eagerness every time he returns -- even now, even with visits six months apart.  Patrick makes his home in Illinois now, in an apartment in Evanston not far from Northwestern where he's just earned an MFA.  Depending on the job search, he'll be there for at least another year.  Nothing remains of him in this house except a box of artwork from elementary school, a few mementos on the keeping shelf, and a basket of clothes that I'm authorized to donate.

Oh, and his mother's heart; the fluttering, jittery, dancing heart that beats in the chest of the woman who gave birth to him twenty-five years ago next month.

I pad around the house with my mug of coffee.  I stand over this small laptop and think of several stories that I could tell about the prodigal son.  Once he got stung by a bee, and when I ran outside to help, he calmly advised me that I should call the neighbor kids' mother, because "she would know what to do".  Another time -- age 4 -- he walked through a dark, snow-filled night to that neighbor's home to get help because I had fallen in the backyard.  He'd often stand in the breakfast nook making faces at me when I cried over bills, hoping that his mother would laugh.  Later, much later, he drove me to the emergency room with a broken ankle; and another time, with a gashed head.

Now he sits at the dining room table discussing Akira Kurosawa with my friend Brenda and sipping a California Merlot which he selected for our Chai Shai carry-out dinner.

In a couple of hours, Patrick will pack his Kia with the clean, folded laundry; and load his bike on  the rack we bought a decade ago for a trip to North Carolina.  I've already stuffed some cash in his pocket, as did his aunt Joyce.  I know he does not need my money; he's been frugal, and he works, and he's been self-supporting for two years.  But that's what parents do.  We give our children what we can.  We teach them our values, and our tricks for survival, and shower them with love.  In the end, what is left we fold and press into their hands just before they depart, hoping it keeps them safe all the way home. 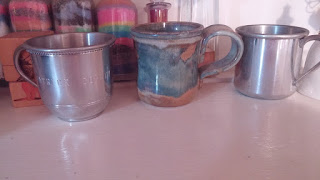