A pleasant mess surrounds me.  Jessica's hat lies on top of some paperwork on which she worked last evening, next to Friday's Star.  On the buffet, opened boxes of Russell Stover's chocolates sit beside a Christmas candy bowl of Jordan almonds.  My knitting, a project started last year and still underway, flanks my favorite rocker, shoved into a blue re-useable Half-Price Books bag.  A swarm of plastic Disney snow globes spans the length of the mantel, and a pile of wrapped presents surrounds the tree.  The tree itself has been set to always lighted and one strand blinks on, off, on, off, over and over, casting a soft flickering glow on the pale yellow paint of the living room walls.  It's Christmas at the Holmes house.

I awakened this morning thinking of another Christmas, 1990. Memory flowed through me and I lay, half-asleep, thinking about that year.

By Christmas 1990, I was only two months pregnant but already large.    At two months pregnant I looked six-months gone, and the world responded.  Due any day? the old ladies would cackle, leaning forward to pat my belly.  I gave them a smile which could have meant anything.  They'd stand up, put one hand on my arm, and say, your husband must be very proud.  Then, without realizing that I still stood mute, they would tell me Merry Christmas! and stride back into the shopping crowd while I gathered my coat around me and moved off.  I did not care about the mistakes made by these women; not then, at least.  I had my baby growing inside of me and nothing else mattered.  Not their confusion over how long until the baby came nor their supposition of my marital state.  All that mattered to me:  At age 35, I finally had a chance to be a mother.

But the absence of that man beside me prompted me to pack a suitcase and drive north, to Kansas City, to spend the holidays.  The mother of my friend Alan's children, Janine, offered a place on her living room futon and I gladly accepted.  And then, just before Christmas Day itself, one of my siblings called.  Mary, Mary -- why aren't you here?  St. Louis.  Jennings, maybe; where it all began.  I called my father and asked if I would be able to stay with him, knowing the answer he would give, not knowing the one which might echo in my heart.  My mother's house, pregnant, without my mother?  I looked out the window at the grimness of the Missouri winter and shook my head.

I bought a train ticket.

I left my car at the train station and stood, shivering, in the small ante-room of the train terminal.  I pulled my coat closer and wished that I had found a ride.  Train-travel had changed.  No conductor waited to take my bag for me.  I straddled it, wondering how I would get it into the passenger car, hoist it above my seat, settle myself beneath it.  I'd gotten to be a good planner in thirty-five years of having a broken body, but now I had to shelter a little babe inside me and could not easily weather jars, jerks and jostling.

A body-less voice announced boarding time, and I shouldered my purse, anchoring it firmly against my chest. Then I pulled a glove off and grasped the handle of my suitcase, the smallest suitcase I could find, with clothing for a week and the barest collection of toiletries.  I felt a twinge as I raised it and looked down, worried, wondering.

And then I felt the warmth of another human, standing close.  Fear flushed through me but his quiet voice followed the nearness of him:  Can I take that for you, Ma'am? he said, and I turned, grateful, to look at him.  Tall, young, strong, dark-skinned, clothed in military garb.  I nodded and we made our way to the train.  The soldier put my suitcase directly above my seat and settled himself across from me.  He asked, How far are you going, and I told him, St. Louis, well, West County anyway. He pinched his forehead and told me, I'm getting off at Jeff City, but someone will help you.  I gazed at him.  He smiled and I found myself relaxing, convinced, willing to trust.

I fell asleep with my cheek against the cold window, the thin glass my only buffer from the ice and wind of the middle land between two sides of the state.  I didn't wake in Jefferson City nor see the soldier leave.

When my stop came, I rose and stood, helpless, worried, in the aisle.  I suddenly regretted bringing anything but a backpack with a single change of clothing.  But as the people around me also rose, grabbing their own belongings, a man strode down the aisle and reached over my head, I've got it, Miss, he told me.  This time, I neither questioned nor hesitated.

The man stood back to let me walk down the aisle, shielding me from the long line of travelers waiting to exit.  He blocked them with  his body, then moved my suitcase and his own towards the door and called down to a waiting train employee, Help this lady, will you? She's pregnant.  And two hands reached for me, two arms lifted me down, setting me on the pavement.  The man followed with my suitcase and behind him, the long, impatient row of travelers flowed, descending, moving around us.  I felt a stillness settle in my belly, followed by an awareness of the cold.

The man said, Is someone meeting you? and I nodded, my lips unable to move enough to let sound escape.  Then I saw my brother Mark on the other side of a small fence, casting his eyes over the group of twenty or so passengers who had gotten off at this stop so near the train's final destination downtown.  I told the man, There he is now, and the man put one hand on my arm and began moving toward my brother, bearing my suitcase, tendering me to someone else who would keep me safe.

The pregnancy advanced, as pregnancies tend to do.  The reasons for my unusual girth revealed themselves and got my doctor's attention.  By and by, my baby came into this world, enter laughing.  Though he was born in the summer, I always think of Christmas when I think about being pregnant:  Of celebrating my baby brother's Christmas birthday that year, him teasing me about being an unwed mother; going shopping with my brother in Union Station; talking with my father about what kind of cradle I might like him to build.  At that juncture, I did not know the baby's gender; nor that I carried two babies in my body on that Christmas journey, only one of whom would survive.  I only knew that ice had overtaken the world; that I was loved; and that a soldier in Jefferson City had found someone to carry my suitcase, before disembarking to share Christmas with his family.

I had intended to name my child "Elizabeth Lucille Johanna", giving the daughter which I expected three venerable names from my family.  When they told me that I would be giving birth to a boy, I struggled to decide what to call him.  But then I thought about my Christmas journey through howling wind on a cold train, and I decided to name him "Patrick" after my brother who was born on Christmas.  When that boy was two or three, we were out Christmas shopping and a lady with unnaturally curly hair bent down to ask him if he knew whose birthday came on Christmas.  Sure I do, my son chirped.   Uncle Steve's!

Happy Birthday, Stephen Patrick Corley. I hope you're having a white Christmas on the banks of the river where you rest.

And to that soldier who helped me -- wherever he is -- and the man who carried out the soldier's mandate to insure my safe disembarkment from that train, my belated but nonetheless sincere thanks for your assistance.  Though only one of the babies who slept within me made it through that strange pregnancy, your efforts kept me from falling on the pavement, or tumbling over the suitcase, or feeling completely desolate, on the long journey home. 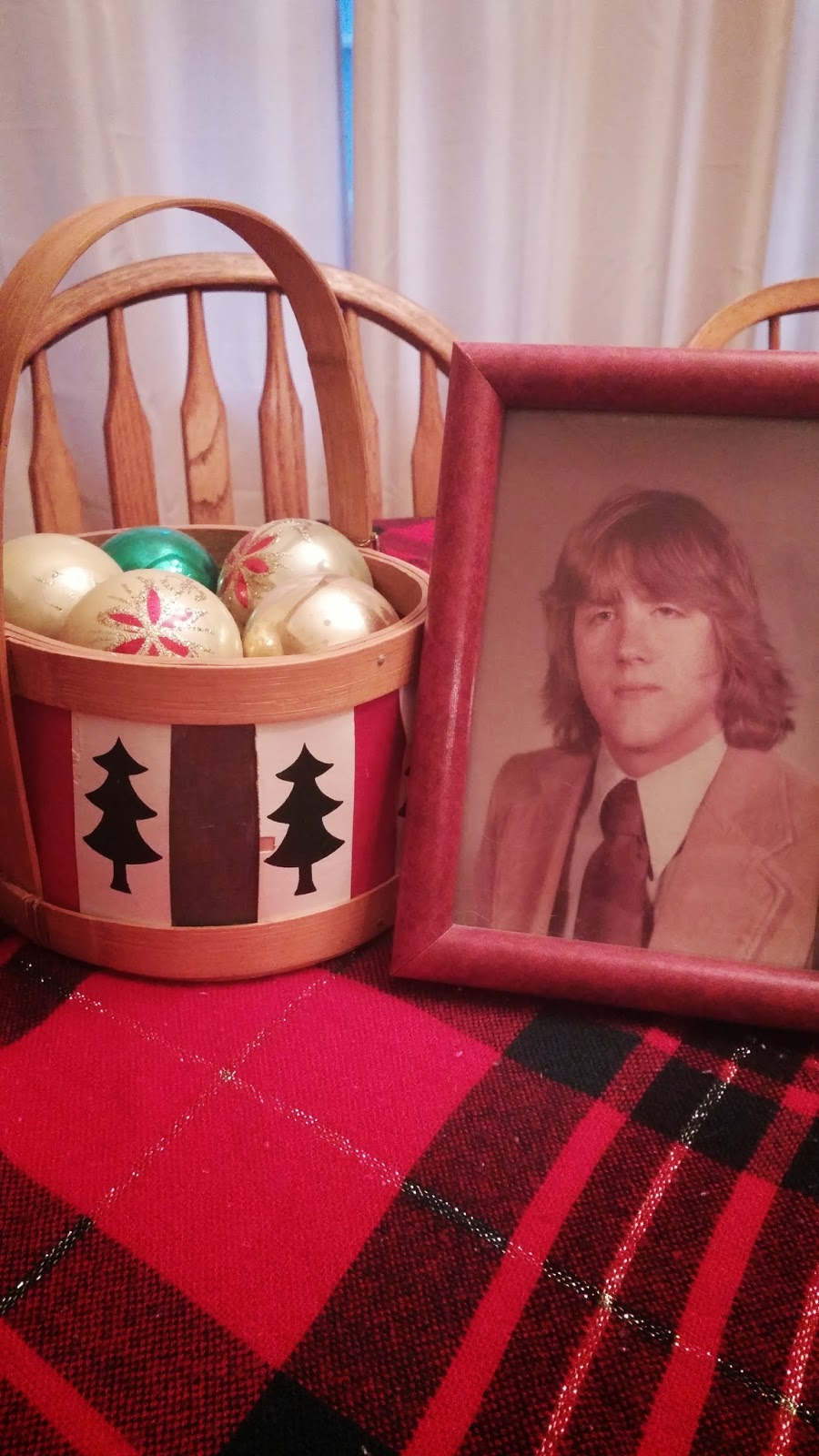